I love to cook, but I’m more of a guesstimator when it comes to actual portions. Just a little fair warning! But that’s the fun part about cooking- unlike baking, if you guesstimate the portions, you still wind up with a pretty tasty meal, or at least, you can easily adjust!

I’m a huge fan of stir fry, but I know it’s not the healthiest thing for me. I recently started making spaghetti squash as an alternative for pasta and added it to this great, healthy stir fry recipe. 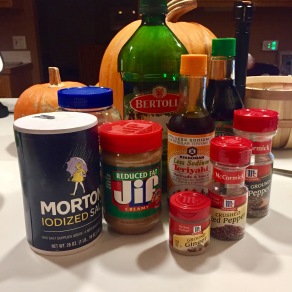 For ease, I baked the spaghetti squash the night before, so I didn’t get any pictures. It’s fairly simple!

Preheat the oven to 400 degrees. Place the spaghetti squash, whole, on a baking sheet. Let bake for 20 minutes. Turn the squash to the opposite side. Let bake 10-20 minutes, depending on crispiness level desired. Personally, I like the “noodles” crispier, so I bake for a total of 30 minutes, but the longer you cook, the softer the squash will become.

Remove from oven and place on cutting board. Let cool. Cut in half and scoop out the seeds and pulp. You can also do this step before you bake it, but I am a spaz with a kitchen knife and spaghetti squash are difficult to cut raw! Once you remove the pulp, take a fork and start to scrape out the squash. It’ll look like noodles! Place in a tupperware and refrigerate (if cooking the night before). 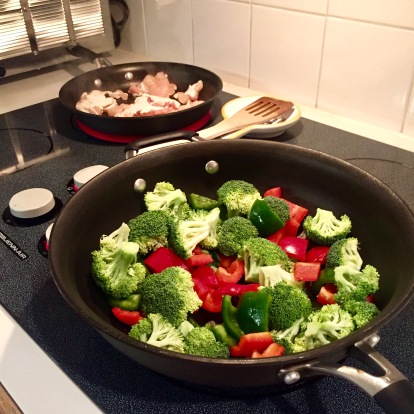 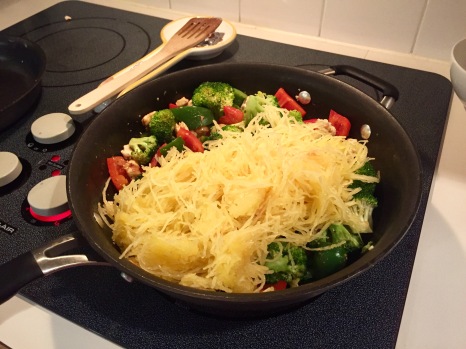 Lower to l0w-medium heat and let simmer for 5 more minutes.

Now, I know the photos aren’t stunning, but hey, this is real life and I’m a real 20-something who barely has time to cook a healthy dinner, let alone plate and photograph my dinner. S/O to all you bad ass chicks who make food look delicious, though.